Made up of at least 51% corn mash, there is a beautifully sweet note in Tennessee Whiskey that plays well with a lot of flavor combinations. Below are two whiskey cocktails that pay homage to the Volunteer State’s drink.

This drink was inspired by the Nashville favorite, fruit tea and named after one of my favorite Elvis songs. For anyone outside of Nashville unfamiliar with fruit tea, it is a fruit lemonade and tea mix; Nashville’s version of southern sweet tea. The nice thing about fruit tea is that there is no standard flavor, it is whatever suits your palate. I go with a 50/50 fruit juice and lemonade blend mixed with an equal amount of unsweetened iced tea. In this drink, the fruit tea brings out the sweeter whiskey notes while the brut Blanc de Blanc sparkling wine adds a crisp note to balance the sweetness rounding out the drink. Serve on a nice day when you are sitting outside and enjoying the warmth.

Use your favorite fruit tea recipe; mine was based on a pineapple, orange, and lemon mix. Combine everything but the wine in a cocktail shaker filled with ice and shake until cold. Strain and pour over a highball glass or Mason jar filled with ice and finish with the sparkling wine. Garnish with whatever fruit is in the fruit tea.

The All Shook Up 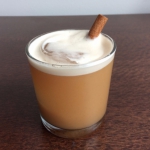 Also named after an Elvis song, the inspiration behind this drink was the smokiness of the whiskey. I wanted to create a late summer/fall flavor with a roasted note to accompany that smokiness. The best way to do that was to create a deeply caramelized roasted apple note. This adds depth to the sweetness of the apple and with such a deep caramelization on the apple there will be a touch of bitter caramel notes that pairs well with the whiskey. The vermouth adds a wormwood flavor to give an interesting touch of balance to the bitter caramel and cinnamon notes coming from the roasted apples. I love to use egg whites in drinks like this because it creates a great buffer and adds body to the drink and decreases harsh flavors while increasing the more appealing flavor notes. Also, if you aren’t a huge fan of egg white, you can skip the straining of the roasted apples and use that as the apple sauce to give body to the drink.

For the Roasted Apple Cider: Take 2 red delicious and 2 granny smith apples, core and cut them into ½ inch slices. In a hot sauté pan, melt 2 oz. of butter then add your apples and sauté them until the butter has browned and the apples are golden. Season cooked apples with a pinch of salt, cinnamon, nutmeg and clove. Add ½ cup of brown sugar and cook until a dark caramel color. In a blender combine the cooked apples with enough apple cider to cover and puree until smooth. In a large bowl combine the apple cider puree with the rest of the cider and refrigerate until cold.

For the Drink: Add egg white to the cocktail shaker with ice and shake until the white is frothy, which is usually about a minute. Add the whiskey, vermouth, and strained cider and shake until cold. Add lemon juice or simple syrup to create a sourer or a sweeter drink. Pour over a rocks glass filled with ice and garnish with a cinnamon stick.